As with Homer's Odysseus, our Odyssey Scholars set out on an epic journey of learning and discovery. After choosing an area of study they are passionate about, the Scholars design a two-year research program that combines elements of independent study, academic inquiry, and scholarly analysis. Working with the program director, they challenge themselves academically, intellectually, and creatively as they sharpen their skills in critical thinking, research competency, scholarly writing, and public speaking. The Odyssey Scholars program--engaging, challenging, and fun--culminates in a major public presentation at the end of students' senior year.

Students may apply for the program at the end of their sophomore year.

Seven sophomores have been accepted into Sandia Prep's selective Odyssey Scholars Program for the year 2021-2022:

- HiiLani Alderete: Creating a Business and The Study of Entrepreneurship
- Mariam Assed: A Comparison of Healthcare Access for People who Live in Poverty
- Sofia Chalamidas: The Influence of Drugs in Social Media and Rap Music
- Tatiana Dalton-Spilca: What Is Black Resilience and Where Did It Come From?
- Avery Dixon: Dancing My Way through History
- Mya Lathon: The Study of Filmmaking
- Rowan McJimsey: The Importance of the Film and Recording Industries

Here's a brief overview of our current Odyssey Scholars' projects: 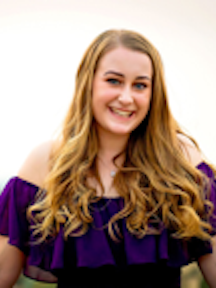 Lauren shifted to researching vision therapy after the Covid pandemic interrupted her work shadowing health care professionals and exploring medical specialties. In addition to reading academic texts and viewing documentaries, she’s conducted interviews with the medical professionals she’s shadowed--an orthodontist, an emergency room nurse, an ophthalmologist, and a pediatrician--as well as a radiologist and a pediatric ophthalmologist. A National Honor Society officer and a vice president of the senior class, Lauren has been tutoring refugees from Africa in math and English since last year. Listing science, medicine, and community service among her passions, she also enjoys performing and has been involved in theatrical productions since first grade. As for her future plans, Lauren said, “I have learned that I probably want to go into a medical specialty with variety and some intensity. I also really enjoyed pediatrics and ophthalmology, and after reading a book that mentioned pediatric ophthalmology, I have been researching this specialty more.”
Click here to visit Lauren's blog. 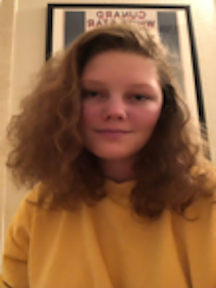 Parker’s project took a turn when COVID hit, forcing a pivot from working with miniaturized satellites to exploring robotics and engineering. Now, through an internship with a company called Build with Robots, she’s helping to build a disinfectant fogger robot to fight COVID. “The first year of my Odyssey project, I worked at the Air Force Research Laboratory to explore aerospace engineering through CubeSat, more miniaturized satellites,” Parker said. “I learned from other college CubeSat teams and from my mentors, and began to research how to build a CubeSat and gather a team.”  When COVID “ground my project to a halt,” she used her skills in 3D Printing, CAD modeling, and coding to land internships in the robotics and engineering fields. Parker, who plans to study Applied Physics with an emphasis in engineering/robotics, is part of a robotics team called R4 Robotics. She’s also worked for a company called B> Than Average, and she teaches students STEM skills, including how to build and maintain a 3D Printer. Parker’s been riding horses for about five years (“I love it!” she said) and lists robotics, engineering, and 3D printing among her other passions.
Click here to visit Parker's blog. 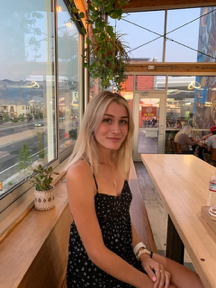 Elise is studying the correlation between sports-related injuries to ankles/knees and changes to the brain. Her research, with an emphasis on health and rehabilitation, has included contact with researchers who studied changes the brain undergoes when people injure their knees and ankles. Elise said she “wanted to learn more about how the nervous system and the brain communicate and take these protective measures, and if there is a way to reverse those changes.” Elise, whose path points to a career as an orthopedic surgeon, has been running track and competing in equestrian sports since childhood. She also weight-lifts and is a member of the National Honor Society and Senior Senate.
Click here to visit Elise's blog. 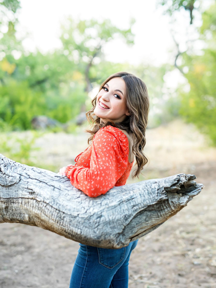 Kylie, Senior
Kylie’s research into infant-maternal bonding and its effect on child development has sparked her interest in creating a NICU incubator that simulates bonding. Kylie is researching crucial bonding elements, such as a parent’s heartbeat and scent, as well as supportive lighting and sound. In researching the science behind the topic, including interviews with neonatologists, Kylie also is examining the ways in which neonatal illnesses can disrupt the bonding process. She said she has “learned that bonding is a much deeper neurobiological action than I had initially expected. After talking to neonatologists, I realized that it can be really hard for mothers to bond with their infants if they’re in the NICU.”  Kylie, who has been training vocally since she was eight years old, lists singing, music, and medicine among her passions. She performs in recitals and is involved in Prep’s theater program. Kylie also babysits and works as a nanny, which, she said, “may sound like just a job, but I truly love working with children.” As for her career goals, Kylie is exploring the physician’s assistant field in the areas of neonatology, obstetrics, gynecology, or surgery.
Click here to visit Kylie's blog. 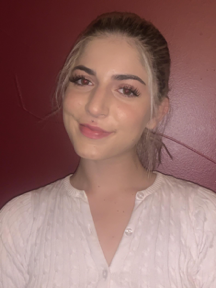 Operating from the vantage point of  “music being so much more than sound to humans,” Anastasia is researching the ways in which music can help people with depression and anxiety. Her Odyssey project shifted into the musical therapy field as she began studying the connection between music and psychology. Anastasia’s research has included interviewing professionals in both fields--mental health and music--and has led her to consider a career that uses music to help others. Anastasia credits the Odyssey program with giving her confidence, fueling her passion, and rediscovering her love for learning. A member of the tennis team, she also is interested in community service, dance, creating, and learning.
Click here to visit Anastasia's blog. 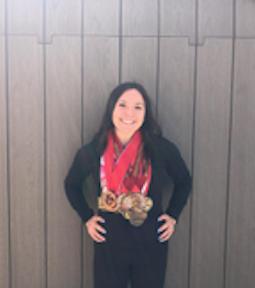 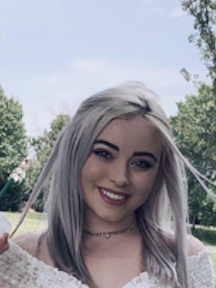 Tapping into her passion for filmmaking, Zoe’s project involves creating two short films with highly divergent subjects: one in the comedy-horror realm and the other dealing with schizophrenia and multiple personality disorder. Zoe said her Odyssey project “started out as a 30-minute short film about suicide awareness, but with COVID that would not have been possible.” She has shadowed an independent filmmaker in Los Angeles, read several books about the myriad aspects of filmmaking, and conducted interviews about mental health and about film production. Zoe said she’s learned the importance of storyboarding and was surprised by the amount of time and work that goes into making a short film, even one that’s just three minutes long. Zoe’s future plans come as no surprise: “My dream job is to be a director in LA or make my own independent films,” she said. Zoe has played soccer throughout high school and middle school, for both club and school, and also has been a member of the swimming, tennis, and bowling teams. In her spare time, she enjoys film, working out, seeing friends, and cooking.
Click here to visit Zoe's blog. 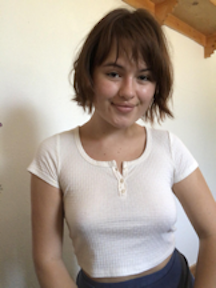 A born performer, Lily is researching recording artists as she composes, records, and eventually sells an album of original music. Lily categories her own music under the “folk” genre and has been studying singer-songwriters such as Bob Dylan, Joni Mitchell, and Joan Baez; at the same time, she’s been reading books about writing songs and poetry as well as studying how impressionist artists capture inspiration from the natural world. Lily has held several concerts, including two online during the Covid quarantine, and she’s started a post-punk/folk band named Citrus Maxima. Throughout her Odyssey Scholars project, Lily said she’s “learned about the commitment you must have to be a musician, or an artist in general, for at times it seems as though nobody cares. This is redeemed, however, when you have a good performing experience or just appreciate your creation on your own.” Noting that “songwriting is something I do for myself,” Lily also enjoys writing and reading, especially works of mysticism and classics, although in her free time she gravitates toward pieces about folk artists. While Lily plans to pursue her music indefinitely, she’s leaning toward a career in law or therapy if she doesn’t pursue music as a vocation.
Click here to visit Lily's blog. 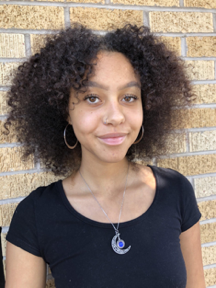 A performer and student filmmaker, Lumina is focusing on the Black community in film production for her Odyssey project, studying African American directors while also making her own movies. “I would really like to highlight women of color in this business,” Lumina said, noting that her research has already taught her a lot about directing movies. “I was unaware of the amount of thought and creativity that is put into it,” she said. “Even though I wanted to do directing, I only had a small idea of what it actually required. But it made my passion for making movies even stronger, knowing how intricate it really is.” Lumina has been a part of the performing arts community for years, in the areas of dancing, singing, and acting. While she loves performing and has no plans to stop anytime soon, she realized she prefers a spot behind the camera. “My main passion is making movies,” Lumina said. “As I got older, I began to truly appreciate the art of cinema. When I was in seventh grade, I had a small part in a short movie, and I instantly fell in love with the whole production. That's when I knew I had to become a director. But I really want to highlight the Black community in film, because there is not enough recognition for all the talent that is at hand.” Lumina said her “goal is to become a successful woman of color in the film industry,” mainly through directing--though she’s open to other ideas once she gets more experience on set. In her spare time, Lumina also enjoys skateboarding, camping, and shopping at thrift stores.
Click here to visit Lumina's blog. 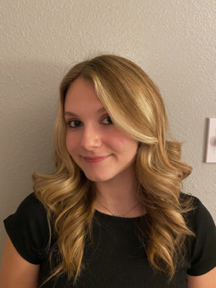 Sydney’s own experiences and her ensuing questions prompted an interest in developmental psychology, which forms the basis for her Odyssey research. “Being a teenager in high school, having all different kinds of friends, and going through my own personal experiences, it's definitely made me more motivated to keep my research going,” she said. Sydney describes her Odyssey research as much more than just a school project, adding that she wants to learn and grow as she continues her work. Sydney played volleyball for four years, but after eighth grade decided to pick up golf and play for Prep, noting the sport “has been in the background of my life ever since I was a little girl, so I decided to make it a priority and really devote myself to it.” Sydney said she thrives off of seeing the people she loves being happy and puts them first, so whatever happens in her future, she hopes “it involves making people happy because that is really pure joy.”
Click here to visit Sydney's blog.