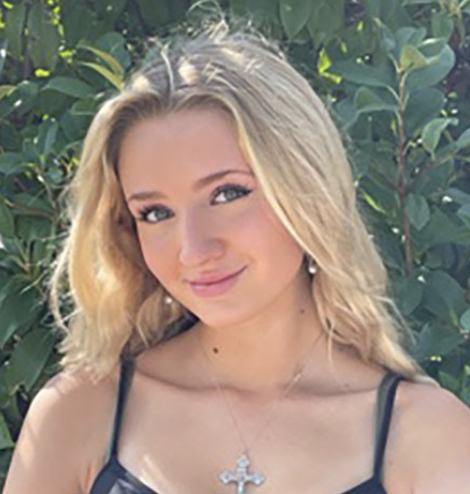 Every morning I open my eyes, grab my phone, and scroll through social media. It’s not necessarily a bad thing. It's habitual, and it's comforting. I get up and walk into the bathroom, past the mirror and do a double-take. Do I look skinny today? I hope I burned off that pizza I ate last night. I shouldn’t have eaten it. I wish I looked like that girl, that PacSun model I saw on Instagram. I walk back into my room and return to my phone. TikTok: a bunch of skinny girls in a sorority, dancing. The comments: “I guess I won't eat today,” “omg body goals.” I close the phone and wrap my fingers around my waist to see if they still fit. I have to be skinny to be pretty.

I began my research on the influence of social media on teenage girls when I personally started experiencing body image issues and tried to look like the models I saw on Instagram. Social media gives people (especially young girls) the idea that unrealistic bodies are totally achievable by intense exercise or diets that aren’t meant for developing bodies. Throughout my research so far, I’ve been shocked by the statistics and the large numbers of girls who struggle with this issue. Have you ever looked in the mirror and wanted to change something about yourself due to a model or a standard that has been set? Young girls who use these apps are exposed to those unrealistic expectations constantly. The ratio of negative body promotion compared to body positivity on social media is really disturbing.

Interestingly, there has been a lot of buzz about this issue on the news lately. A recent study showed links between depression/anxiety and body image issues linked to apps such as Facebook and Instagram. So far I have read a lot of articles about people who have been influenced into eating disorders by social media, many of which are written by parents of children who have gone down a dangerous path.

The part that astonishes me the most is that social media continues to be such a major part of everybody’s lives despite research showing its negative long-term effects. Social media is addictive, and there’s actually research indicating that people who don’t receive enough “likes” or comments on a post feel bad about themselves and become depressed. On the contrary, people receive a great deal of gratification when they are validated by a social media post. Such influences teach people they have to look a certain way to get the validation they are seeking. Girls don’t feel good enough because social media promotes a prominent beauty standard that is almost impossible to achieve without plastic surgery. These influencers lie about how their looks are achieved, so girls will go through ridiculous diets and exercises to try to meet the standard. In reality, all that these influencers did to achieve that “perfect” body is to undergo plastic surgery.

By researching this topic, I can highlight both parents and teenagers the dangers they are facing as soon as they open a social media app, and the potential mental harm they could be exposed to. Social media hardly makes people feel confident and sometimes challenges them to be something they're not, regardless of the consequences.

My goal is to teach people to be aware of these dangers and to help them realize that most of the things they see on social media are not real. No one should ever doubt themselves because of a social media platform.