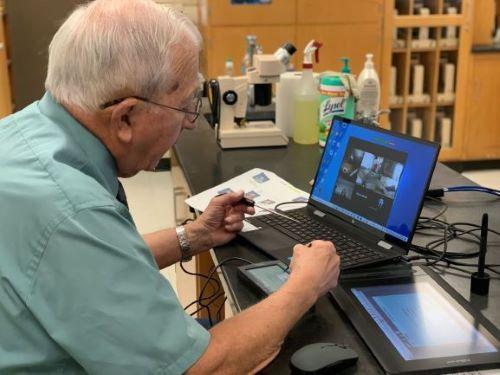 Master Level Teacher Reflects on Teaching During the Pandemic

Curiosity is often considered one of the most important qualities of a good scientist. It is also a quality that brings success in education. Ernest Polansky, Sandia Prep’s longest-serving faculty member, has been instilling curiosity in his students for more than 50 years, teaching them to become independent learners, while continuing to learn himself.

A lifelong Albuquerque resident, Polansky began teaching high school science in 1966 after graduating from the University of New Mexico with a bachelor’s degree in chemistry. In 1968 he was awarded a National Science Foundation Grant to study radiation biology during a summer session at the University of Utah. He continued teaching in the classroom and admits, “I discovered early on that I enjoyed working with teenagers.” That passion is genuine. Polansky has inspired hundreds of students to pursue careers in clinical medicine, scientific research, and related disciplines.


Polansky was hired as a biology teacher at Sandia Prep in 1980. His courses include an in-depth study in genetics, biotechnology, microbiology, and molecular biology. Students have affectionately named Polansky “Lord of the Flies” for his popular experiments breeding fruit flies to study genetics.


In March 2020, teachers worldwide were given their greatest test. The COVID-19 pandemic forced school closures and thrust the teaching world into the virtual classroom. Polansky is meeting the challenge head-on, learning new technology, using new teaching platforms, and adapting as he goes. He worries, though. “I have spent my entire career developing serious and meaningful hands-on activities in the lab. Science is hands-on. Experimenting. Making mistakes in the laboratory and figuring out what went wrong and why.”


He wants to preserve curiosity, so he is now challenging his students away from the physical space of a lab. At 78, Polansky finds himself teaching students who have little or no memory of the world as it existed before smartphones.

He can be reassured that he is connecting with them in this virtual world. Emily, a freshman, says, “Mr. Polansky is the best teacher I have had at Prep. Even though I am taking classes at home, he is constantly there, encouraging me and my classmates to email him and to see him for help. I connect with him and appreciate how hard he is working to fit into this new way of teaching and learning.”


Polansky cherishes his student relationships, and upon reflection he says, “I never realized how much I relied on facial expressions to gauge how well a student understands the material. I now

realize how easy it was to help students solve problems and help them out when working with them one-on-one, in person.”