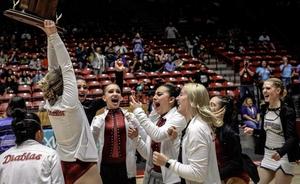 On Saturday, March 19, the Sandia Prep Dance Team handily took first place at the State Spirit Championship at The Pit, for the first time ever. Winning the Class 1A-3A title was a particularly sweet victory as the team has placed second or third in the state championship competition for the better part of a decade. Senior Rachel Stell ’22 was quoted by the Albuquerque Journal for the historic victory, noting that “The skills we hit, we hit so incredibly hard!” The team bested St. Michael’s by nine points. Last year, the Sundevils nearly won, losing to St. Michael’s by only two points. After so many close calls, junior Kiarra Rodriguez ’23 told the Journal, “Honestly, that made us work even harder” to snatch the state victory. After winning, the entire team huddled on the court, holding their well-earned trophy aloft while celebrating. The Albuquerque Journal covered their victory here.