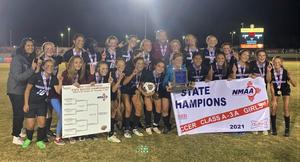 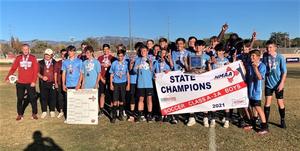 Congratulations to our Girls and Boys Varsity Soccer teams! Both teams won the state championship title yesterday at the University of New Mexico soccer complex.

The girls team avenged their loss against last year’s champions from St. Michael’s by defeating them this year, 1-0. Coach Matthew Westerlund told the “Albuquerque Journal” that the team clearly used the opportunity to face last year’s nemeses as motivation. Maddie Hashagen ’23 put in the early goal from an assist by Mika Juan ’23 and the team held the midfield the rest of the game to ensure St. Michael’s didn’t score. It’s the team’s fifth championship in six years and tenth overall.

The boys team was energized taking the field to defend their state title against New Mexico Military Institute (NMMI). They were relentless going into the second half after Jaxon Tregembo ’22 tied the score up 1-1 at the end of the first half. The team showed no mercy, winning 5-2, giving the boys their 20th state title. Coach Tommy Smith told the "Journal" that despite the boys’ success year after year, “It doesn’t stop the hunger to still want to win.” Smith also noted he was proud of the team for coming through the pandemic and winning 20 games. “It’s a difficult thing to do.”

Both teams should be very proud of their Sundevil determination and teamwork.