Athletics in Full Swing for Upper and Middle School Students 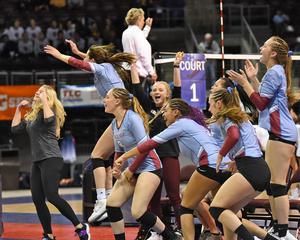 COVID-19 has not stopped Sandia Prep from offering athletics to both high school and middle school students this spring.

requirements, every upper school sport at Sandia Prep will compete, according to Athletic Director Willie Owens.


“Every single upper school sport is in action with practices right now, and sports postponed from

the fall are in full swing -- cross country, volleyball, and soccer,” Owens said. In addition, the

school’s eSports teams are boasting record numbers of participants, and its new mountain biking team is scheduled to compete.


Sandia Prep’s student-athletes are excited about having the opportunity to compete, especially

those in their senior season.


“I am really grateful and excited to begin playing high school soccer again,” said Ellie Cook ’21, who has committed to playing womens soccer at Fort Lewis College. “It will be awesome to be back with my teammates, new and old, and compete with the other high schools. This season will go by quickly since it is so short, so I’m going to make the best of it.”

season cut short. “I really thought that I wasn’t going to have a senior season,” she said. “But Prep really never stopped fighting for us to get back out on the court. Even when having a season was unknown, we were able to practice and get to be with our teammates. Although this season may be short, I think it’s going to be the season I will remember the most.”


Baseball player Gus Walker ’21, too, said he’s happy that Prep athletes will take to the field this

spring. “Having baseball canceled last year was devastating, to say the least, but having a senior season this year means everything to me,” Walker said. “I’m super grateful that Prep has figured out a way to let us safely play this year. The team has worked hard since last March, so I’m very excited to finally get on the field and play as a team.”

At the middle school level, volleyball, boys basketball, and track are currently competing.

have continued since last fall. All student-athletes are screened and temperature checked before being allowed to participate in athletics or Wednesday activities. Athletes check in for practices with the DrOwl pre screening app, and coaches, all of whom have been allocated a digital thermometer, take students’ temperature as they arrive, even if they have been on campus all day for classes and previously screened upon entry.


Sandia Prep families have the option of sending their students to campus four days a week, with