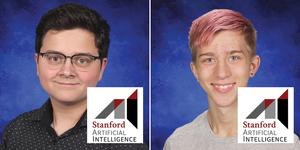 Congratulations to Sandia Prep students Benjamin Mannal '22 and Sam Lawyer '23, who were accepted into Stanford University's Artificial Intelligence Summer Program. They will be attending a series of classes hosted by Stanford grad students.
Mr. Nick Aase, Sandia Prep computer science teacher, says he's been bowled over by both students' talent.
Of Ben, he says: “Ben's going to be a rising star in computer science. I've been so impressed by his work, and I'm so excited for him.”
Of Sam, Mr. Aase says: "Ever since we were able to get his keyboard out of Portuguese mode, he's been off to the races, and he certainly has a bright future."