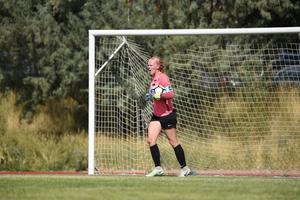 Sandia Prep Senior Samantha Jeffries '20 has been named the Albuquerque Journal's metro female Athlete of the Year, the first ever chosen from a smaller school for the award.
Sam, who played both soccer and basketball for Prep, has been an all-state keeper since her freshman year. She led the 3A division in goals-against average and helped lead the Sundevils to a state championship last November. As noted in the Journal story, "Sandia Prep didn't lose a single state tournament game during the last four years with Jeffries in the net."
She also averaged 12.3 points and 10.8 rebounds a game for Prep's varsity basketball team. She carries a 3.9 grade point average.
Sam landed a Green and Silver Presidential Scholarship to attend and play soccer at Eastern New Mexico University next fall, where she plans to major in film.
Read more about Sam's accomplishments in the Journal story here.