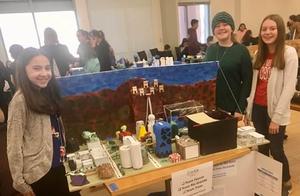 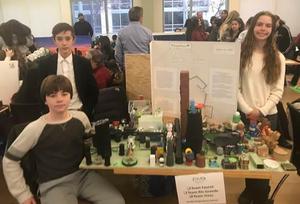 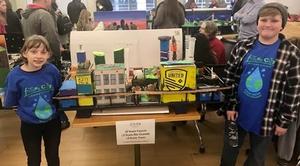 The best middle school engineering design teams in the state converged on the University of New Mexico School of Engineering to see who had the most viable solution to innovating a resilient drinking water supply to a city 100 years in the future.

The DareDevils were represented in three teams: Team Rio Grande (7th grade), Team Trees (6th grade), and Team Faucet (6th grade). Team Rio Grande (Issabella Silva '25, Sydney Hepburn '25, Nora Clark-Slakey '25) made it into the top five final round. These young ladies presented to and were questioned three times by a panel of six judges made up of engineers and scientists. They controlled their nerves, applied their public speaking skills, and answered every question with ease and like pros.

For their efforts, Team Rio Grande earned third place overall. With fifteen schools and more than thirty city models competing, this was no small feat. The DareDevils' ingenuity and creativity also were recognized as Team Faucet received a special award for Best Creative Use of Recreational Area. Team Trees received a notable award, Best Land Surveying Practices, as determined by a special judge representing the National Council of Examiners for Engineering and Surveying. Along with a certificate of recognition, each team won $100 to spend on a celebratory pizza and ice cream lunch.

Congratulations to all the DareDevils!