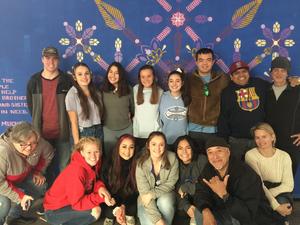 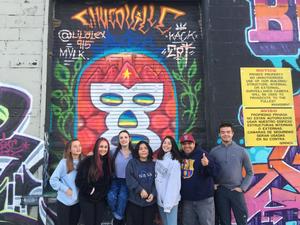 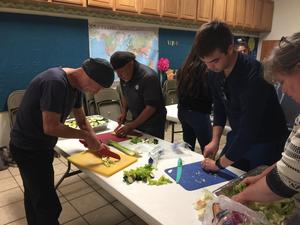 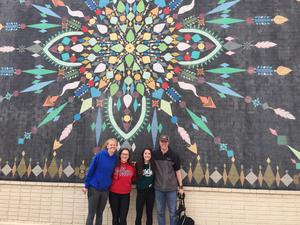 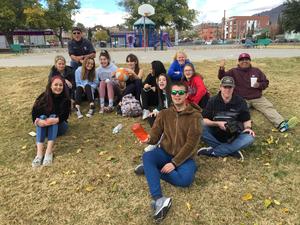 A group of Sandia Prep's Spanish 5: Border Studies students recently visited the U.S.-Mexico border as part of a long-term project to call attention to the traumatic experiences of Central American and Mexican immigrants.
Instructor Señor Claudio Perez has been escorting students to the border in El Paso, TX, since 2014 as part of his Border Studies and Special Topics in Latin American Culture course for seniors.
Students had the opportunity to speak with immigration agents and advocates for the immigrant community, and heard powerful stories from people who have been deported back to Mexico. The goal, Señor Perez explains, is to help students to develop a broader understanding of the social, cultural, economic, and political compexities immigration presents.
Señor Perez was a panelist recently at the National Humanities Conference, Roots & Routes: Navigation, Migration, and Exchange in the 21st Century. The conference was hosted for the first time outside the continental United States in Honolulu. It was organized by Hawaii Council for the Humanities, Humanities Guåhan, Northern Marianas Humanities Council, and the Amerika Samoa Humanities Council.
The conference highlighted some essential topics facing Pacific Island communities, including militarism, climate change, and migration. Senor Perez presented his Border Doors project with two other panelists, Dr. Jesús Pérez and Professor Christopher Gildow, both from Cascadia College. The presentation was entitled "Border Doors: Unmasking the Zones of Meaning." The border doors project depicts some of the work that Prep's Spanish 5: Border Studies students have been doing for the past five years. These doors call attention to the traumatic experiences of Central American and Mexican immigrants and the dehumanizing media discourse that portrays them.